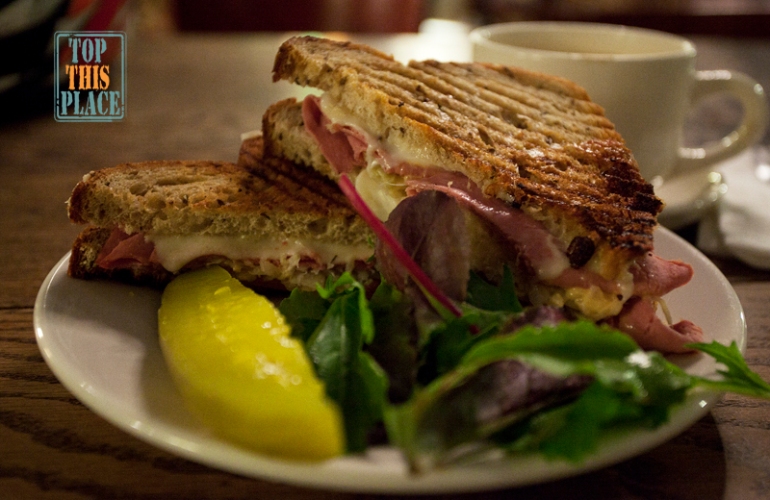 Got no place to go? Got nothing to do? Got a hankering for a warm place with an excellent atmosphere? Gotta try Beans in the Belfry.

So I discovered this little sanctuary of calm in the hills of Brunswick, MD from the founder of the Brunswick Photographer’s Guild. They hold their semi-random meetings there on occasion and I was lucky that the first one I had the honor of attending was at Beans. The building that Beans is located in is former Methodist church that’s over 100 years old. Random fact: My father used to attend church there as a child. That doesn’t date me or anything . The interior is painted in a weird green pattern; I guess you could probably refer to it as mold seepage green. It really is charming though, I swear. They have a mish mashed, mix match of tables, chairs, couches, and clientele as any I’ve seen. It’s a place that doesn’t take itself too seriously and is a place to go if you want to chill out a relax.

So, now I’m ahead of myself. This was a slightly chilly Friday evening. I don’t get off from work until 5:30PM and with a haircut appointment and having to shower, shave, and get purdy, I knew I probably wouldn’t be spending most of my time on the road under the sun light. What better way to go cold dark conditions than on the motorcycle? So I found a suitable leather jacket laying around the house, made sure I wrapped up in layers, and headed out. Uneventful trip. Blah, blah, blah, and we/re here!

Impressive, no? I told you it was in an old church. Parking on the street can be a bit scarce and you need to feed the meters, but there’s a lot around back. The hill to get in is fairly steep and it’s mostly gravel, so it’s a bit treacherous to anyone on two wheels. Anyways, after getting settled and still feeling like I had to wind running through me, I trudged up the hill to what else, but the sound of music. Score! warm beverages, hot food, and good music awaits!.

On walking in I saw that the band playing was called the Jimi Cupino Project. They were a three piece of a guitar, a sometimes harmonica, and a set of large bongos(?). They weren’t too loud and they played a mix of classic rock and bluesy music. Beans has music acts and other activities randomly. There’s a schedule of their upcoming events that’s updated regularly on their website. I’ve seen other music acts and a play here as well as random clubs using the place to host meets.

So I set all my gear aside and headed up to order. Their menu consists of the normal coffee house fair of coffees, teas, hot drinks and includes a little extra like hot sandwiches and paninis as well as deserts ranging from baklava to homemade cookies. I order a chai latte and The Russian.

The chai was good, but it tasted like it was made from a mix. I’ve only ever been to one coffee house that makes them from scratch and it’s a dead giveaway at it being made from a mix when it’s almost sickeningly sweet. It was good, as far as chai latte’s go, but again, it was very, very sweet. 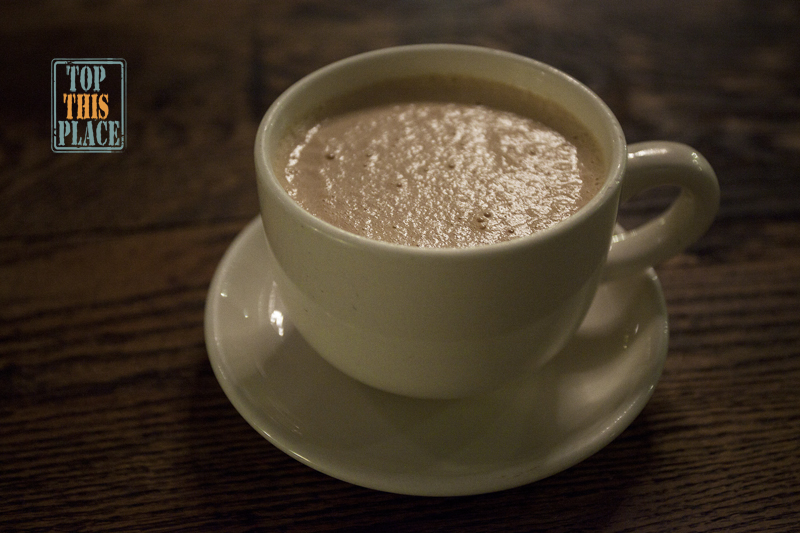 The Russian was basically a Reuben. It’s a corn beef and kraut sandwich on rye bread. There sandwiches are served with a pickle and a salad. The salad was a bit lacking in dressing. I’ve had it before and it was good. This is the first time I was unimpressed with it, but it looks like it’s mainly for plate dressing anyways. The pickle was awesome. You could serve me a pickle covered in mold and rolled in sand and I’d probably tell you it was awesome. The only way to make an awesome pickle awesomer is to fry it and you could even keep the mold and sand. What can I say, I like pickles. The sandwich was excellent and that’s what keeps bringing me back. The Russian wasn’t dry at all and the bread was toasted but not dry. It had a nice crunch on the outside, but the rest of it was moist and airy. And although I like Reubens, my enthutiasm for them isn’t as great as pickles. This sandwich was great as is so no additional condiments or modifications were necessary. 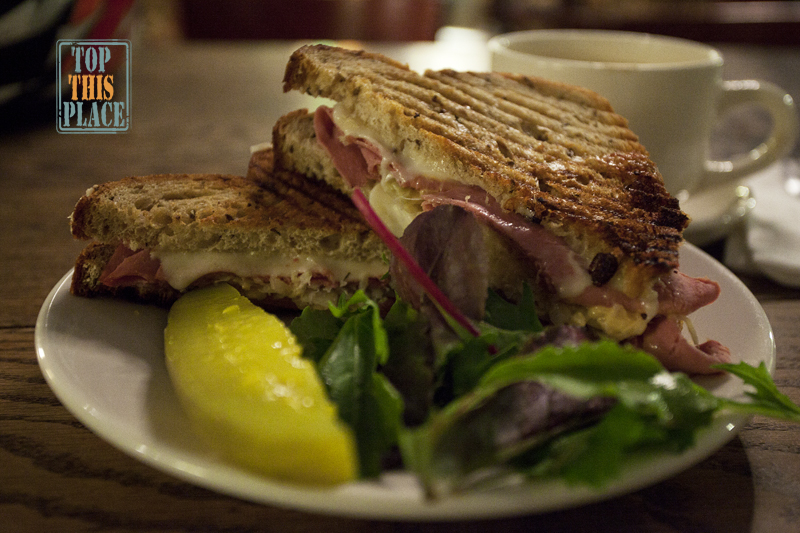 So after enjoying my dinner and a few good tunes, I geared up and headed home. Was it worth risking life and limb in the cold with a headlight that’s only good for finding anything dropped on the ground next to the front wheel? Yes! If you’re in the area and you just need a break from something, anything, make sure you check out Beans in the Belfry for a good time and a much deserved break

Location: Beans in The Belfrey