It seems to me that a lot of reviewers on this site believe that they have found the epitome of a hole in the wall and extol the virtues of their find to no end. All I have to say about that is, bring it!

Through a bit of insider information from reading David Hobby’s HoCo360 (http://hoco360.blogspot.com/) blog, I discovered that a little taqueria in Elkridge, MD had recently been filmed for the Diner’s Drive-ins, and Dives show with Guy Fieri to be aired in mid-December, so I decided if it was good enough for Guy Fieri, I’d check it out.

Sunday morning ‘s forecast was for 64F and sunny so I figured I’d make it a good day and ride the bike to Elkridge, especially since the colder weather is making riding days farther and farther apart. I loaded up the bike and left home base at 11:30 to head up 81N and 70E towards Baltimore. The day started off nice with me just wearing a hoodie. As soon as I crossed the first mountain on 70, the temp dropped about 10F-15F and decided to stay that way for the rest of the day. I think it’s needless to say that it made for a cold day, but I said it anyways.

So about 88 miles and one and a half hours later, I was at my destination at the grand Shell station in Elkridge, MD off of RT 1. Yes folks, the R & R Taqueria is part of a Shell gas station.

It was fairly busy and there was no parking. After riding from one side of the lot to the next, I was able to find a spot in front of R & R’s entrance.

After swapping out to the hoodie and grabbing the camera I walk inside and man was this place crowded! With all of 14 people, one of which was me, this place was packed to nearly over flowing. The seating area of R&R includes two small counters; one of the counters has 4 stools and the other has 2. This seating area share the hall space of the Shell station’s cooler section, divided by a large plexiglass wall so that the Shell station’s customers can stare in childlike wonder at the animals grazing in the R & R taco reserve. Unfortunately, it seems that the Shell station get the majority of the divide cramming people into a 4’-5’ wide hall on the R & R side.

Turn the other way and you see the hole in the wall where you order food at. I’m thinking that’s the best way to describe it. The tiny seating area opens up to a hole with a counter that houses a kitchen behind it.

I managed to squeeze through to the counter in time to play “what do you want?” Of course, the menu is generally in Spanish and thankfully I can read a bit of Spanish even though the only two things I can correctly say are, “Yo tango pantemedias de su madre en mi cabesa”, and “Donde es la biblioteca.” Essentially I can insult a Spanish person by telling them I have the pantyhose of their mother on their head before asking them where the library is so I can find a translation guide for their ranting. So I managed to order meat taco, a pulled pork taco, a pork belly taco, and some type of sandwich. The sandwich I originally order was a pork leg sandwich, but the girl at the counter shook her head and said something about not having it, you’ll have this, it has pork. So I did the only thing I could think of while under pressure and ordering food that I didn’t know what I was really getting, I agreed and pulled out the plastic. $12.06 later, I was waiting on my food.

While waiting, the 6 people eating in left and the people waiting on their food got their orders and cleared out. I was one of the only people left, so I grabbed the seat near the door on the two seater counter so I could see my bike and sat down to try some tacos. 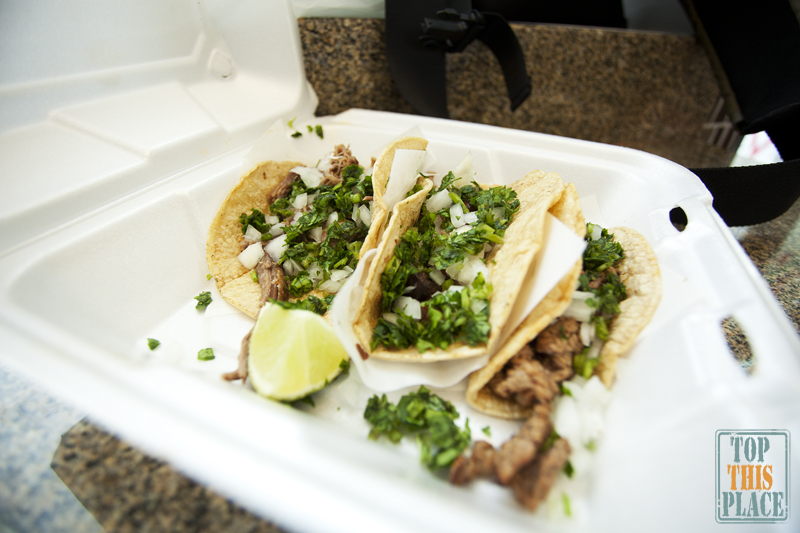 The tacos were in corn tortillas filled with meat, onions, and cilantro. I don’t know if I was supposed to ask for pico or other toppings; that one was lost in translation. So from left to right we have pulled pork, pork belly, and carne asada. The pork was first up. The meat was nice and tender, but it didn’t have a ton of flavor. The corn tortilla was dry and all in all, it was a completely average taco. After that, I went on to the pork belly and I can tell you that I’m a pork belly fiend. Finding out that they served pork belly tacos was one of the reasons I decided to drive all this way for tacos. The pork belly taco was nice. It had a bit more flavor and although the belly was a bit chewy, it was still had a good flavor and was fairly tender. The third and final taco I tried was the carne asada. It looks like bits of cube steak and unfortunately is was dry and didn’t have a lot of flavor. Man what a bust.

So I hopped on my bike disappointed in having brave the cold on a 171.6 mile round trip for three tacos that added up to average. It just wasn’t the day I was looking for.

Ah, but what about the pork-something-or-other sandwich? Is that what you’re wondering about now? Well, aren’t you clever. I didn’t feel like eating it there, so I put it in the bike and went home with it. I did bust it out once I got home.

This was the saving grace of the day. The sandwich contained nicely seasoned pork chunks, re-fried beans, avocado, pickled jalapenos of the green and red variety, tomatoes, and a white cheese. This thing was delicious. The tacos are $2 each, so this was about half of my bill. I bit into one half and it was flavor overdrive. The beans weren’t dry at all and neither was the pork. The sour spiciness of the pickled jalapenos mixed perfectly with the smooth sweetness of the avocado, the tang of the cheese, and the juiciness of the tomatoes. It was really a good sandwich. If I would have started out with this and skipped the tacos all together, I think I would have had a better experience.

After reading several other mixed reviews of high praise and tales of mediocrity, it seems that most people aren’t pleased with the tacos and I get this. At $2 a taco, you can’t really expect much. It’s the loss leader before the up sale. They promise you cheap tacos, but they don’t disclose the quality. With my experience at other taquerias, Mexican restaurants, or other places that serve Mexican food, a good taco doesn’t come at $2. As for R &R Taqueria, the verdict is still out. I was read to totally discount this place until I got home and tried the pork-something-or-other sandwich. I would recommend that you stop by and try it out if you’re in the area, but skip the tacos. I wouldn’t recommend riding 171.6 miles in weather that felt like it never got about 55F.

I guess I’ll just have to wait to see what Guy Fieri’s opinion on the place is.

Update: On January  31st, 2017, Chef Rod bids farewell to the Shell gas station and to their new location. Click below for new location.