Who would have thought that it would be warm enough to go riding in West Virginia on New Year’s Eve?

I donned my semi-cold weather riding gear and headed out towards Shepherdstown, West Virginia to do a review of the Blue Moon restaurant. I’ve been there quite a few times before as I lived in Shepherdstown and it’s a great place to eat if you have time? What do I mean by that? Well the Blue Moon doesn’t rush their food; they’re not a fast food restaurant and you’re not going to be in and out like if you were to go to McDonalds, Fridays, or the local Chinese Buffet. This is not a bad thing; it’s just something that needs to be understood. Good food takes time and sometimes even the most fast paced person needs to take a moment and relax.

So as I rode by, the small parking lot at the front of the building was full leaving me to park in the university parking lot across the street. This is safe to do when schools out, but I’ll tell you to park here at your own risk during normal class hours. The front of the building much more plane than the inside and you can see the larger dining area with the huge windows all the way around.

Upon stepping inside, you’re greeted by signs spouting the specials of the day, the desert counter, the ice cream counter, and the quirky decorations that say, “We definitely belong in Shepherdstown.” Shepherdstown is an artsy place known for great local music scene with open mic nights at several of the local bars and restaurants, including the Blue Moon, and the large amount of art that can be seen around town from the local artist. The only downside to this is that it’s a large tourist draw and can make the small two block downtown section of this little riverside college town seem worse than the worse two blocks of DC on a busy weekend. Walking is your friend. 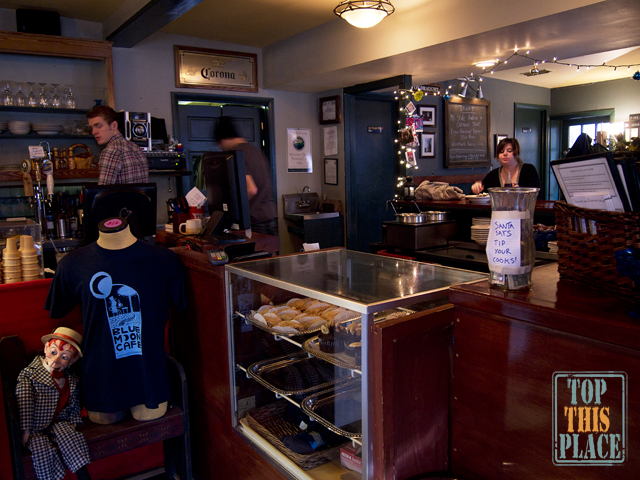 And now, back to the Blue Moon review. It’s a seat yourself kind of place, so grab some menus and find a seat where you’re comfortable whether it’s in the large bright open dining area, the slightly more quiet topside, or even in the large picturesque outside area. 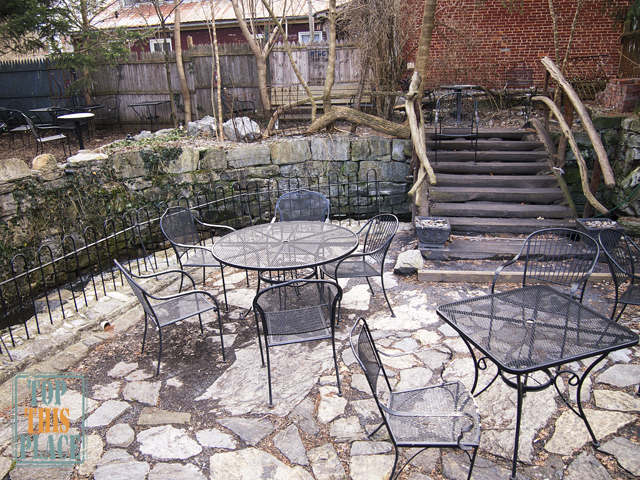 I opted for a seat next to the kitchen where it wasn’t quite as crowded and I could get a good vantage point for some photos. 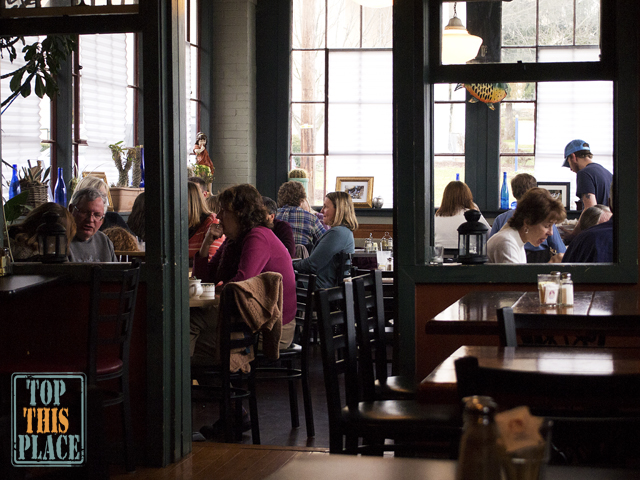 Their menu is fairly large with everything from appetizers to entrees and vegetarian to carnivorous. You can get soups, sandwiches, salads, nachos, noodles, coffee, soda, wine, beer or any variety of items. I opted for The Pilgrim, crab melts, and an un-sweet tea to drink. The Pilgrim is a “Maple Lawn free range smoked turkey breast oven heated with brie on a ciabatta roll topped with cranberry aioli” and the crab melts are “savory crab meat and cheese, oven baked on English muffin wedges”.

The Pilgrim sandwich came out first. The turkey wasn’t your typical thin sliced turkey but was instead large chunks of turkey breast. The turkey had a good smoked flavor without being overwhelming that mixed nicely with the slightly pungent taste of the brie and the sweetness of the cranberry aioli. 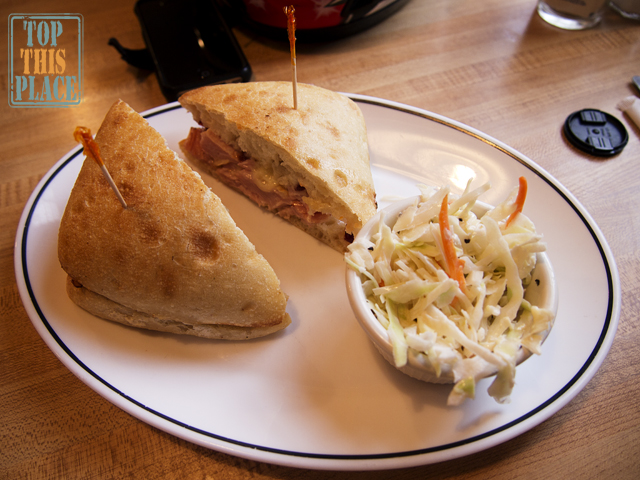 The crab melts on the other hand were absolutely…oh wait, I never got any crab melts. I know, it’s a travesty. From experience I can tell you that they are amazing with the mixture of a sort of crab dip topping on the English muffins. I would have said something to the waiter, but at that point I was already full from the sandwich.

It’s unfortunate that I did not get to try one of my favorite items on the menu and photograph it to share with everyone who reads this review, but I still had a pleasant experience. The Blue Moon is one of many excellent restaurants in Shepherdstown and should definitely be kept in mind if you’re ever in town and need a relaxing bite to eat. With a menu as eclectic as their decorations, they’re sure to have something to fit every taste.