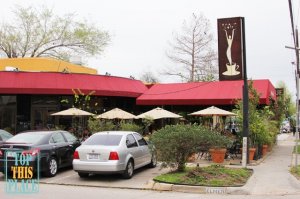 Just thinking back at my breakfast experience at Empire Cafe in Houston, Texas makes me extremely hungry all over again. Empire Cafe can be found in the middle of greenery landscape just entering the Montrose area. This area is one of my favorites in Houston during the day. We were one of the many families waiting in line for breakfast. It was already jam packed and I was worried if we were going to find a table. Although, Empire Cafe has seating outside, on this morning it was pretty chilly outdoors. 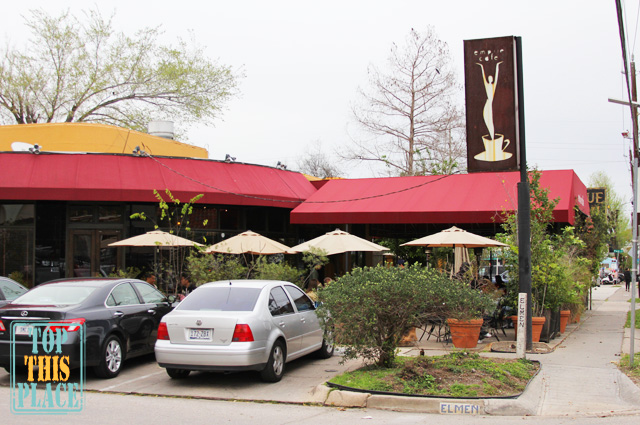 As you go in there is line to order your food, pay, then you proceed to look for a table. As your waiting,you can look at some sample specials on the plates which gives you an idea on what to order.

My son without hesitation orders pancakes, eggs, and bacon. Pancakes at Empire Cafe are seriously big with fresh strawberries and bananas sprinkled on top with powdered sugar. Eggs and bacon are considered sides. Some dishes do not include these sides probably because the dishes are in my opinion big sized portions. My husband orders the egg speciality Empire Cafe Benedict. It includes two English muffins and ham with hollandaise sauce. Served with cheddar hash browns and fresh fruit. I order the enormous size looking Italian toast with mixed berries.

We got lucky and found a table for four. The waiter came by cleaned the table. I was very amazed of how crowded it was for breakfast time. I knew I was in for a real treat. Our food came and I was blown away how thick my Italian toast was!! It was awesome. My son dove right into the bacon which was a healthy sized portion. We all began to eat and I immediately gave some of my toast to my husband to try!! It was SOOO delicious. The mixed berries really complimented the toast. The syrup in my opinion was probably not even needed because the berries were sweet enough. The Italian toast was thick and soft!! I could taste the cinnamon and vanilla which made it all the better. My sons pancakes were fabulous as well. Having strawberries and bananas with powdered sugar really enhanced the meal. The eggs on the side were plain eggs no surprise there. Although my husband finished the Empire Cafe Benedict, he commented that it wasn’t anything mind blowing WOW! So it wasn’t bad but it wasn’t OMG great, either. The only thing that was extremely disappointing was the cheddar hash browns. We could have done without that part of the meal. It almost tasted like it was the last packet from the freezer and it was exposed to freezer burn. However, the side scrambled eggs and bacon was very very good. 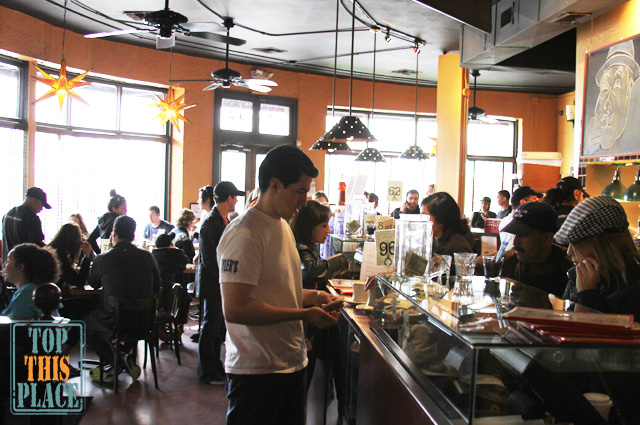 I’m not sure if it was on this particular day or if it’s always like this but it was really loud! There were many people in a small area in the back room of the cafe and I found it pretty difficult to talk or listen to my family. Either way it didn’t keep me from inhaling my Texas sized Italian toast that I really enjoyed!!

Empire Cafe has their system down to a science because they were working fast and were organized! The menu included many specialty coffee’s and alcoholic drinks. I hope to go back soon and try one or both. It would be difficult to order something different because my Italian toast was the best out of the pancakes and Empire Cafe Benedict!