What a month March has been! In our house, St. Patrick’s Day is the most important holiday of the year, so the entire week leading up to the holiday was spent prepping and cooking for fifty people. As if that wasn’t bad enough, I managed to come down with a throat infection after attending the Renaissance Festival a couple of weeks prior. It was time for some relaxation; a break from cooking and a night where someone else prepared a great meal. Sunday night, we were off to Baby Kay’s for some good, authentic Cajun grub! We got there, and unfortunately they were closed!!! 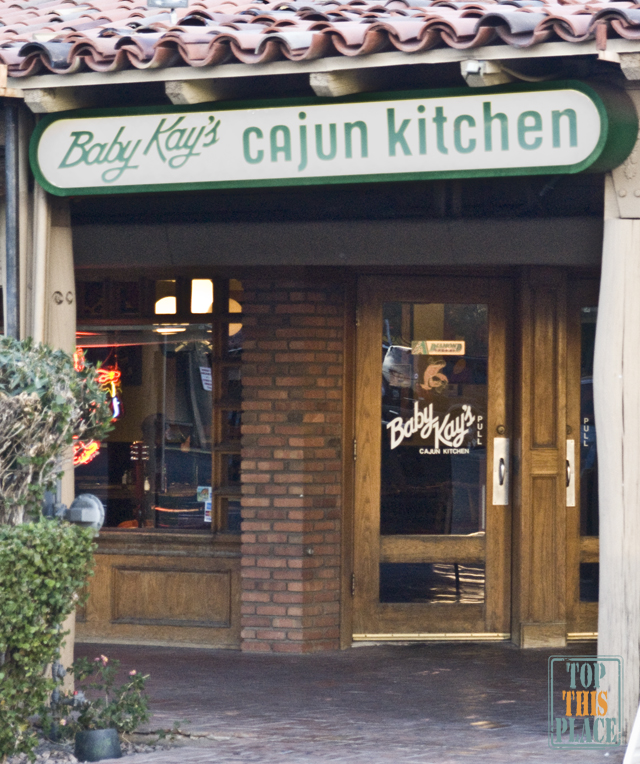 But that wasn’t enough to discourage me; I had been craving Baby Kay’s for nearly a month after our first visit. Work was overwhelming as circumstances rapidly changed, and the week was already full of chaos so we headed back down Wednesday night. Baby Kay’s Cajun Kitchen is located in the Town & Country shopping center in the Biltmore. They are definitely a hidden gem within Phoenix, infamous for their authentic Cajun cuisine. We’ve lived here for nearly five years, my husband had lived in south Phoenix for ten years prior to us meeting in Ohio. I love it when I find a place in his old stomping grounds that he didn’t know about!

We walked in and were promptly greeted by one of the staff, and since it was such a beautiful evening, we opted to sit out on the patio. I was pleasantly surprised that even on a week night, they had live music from local talent playing inside the restaurant. After being seated, we were quickly acknowledged by our waiter, who took our drink orders while we perused over the menu again. But in the meantime, we decided to enjoy a couple of appetizers.

I’m a firm believer that any Cajun restaurant must be able to make good, delicious hush puppies; if they can’t they should close up shop. The hush puppies at Baby Kay’s are absolutely delightful. The perfectly fried little balls meet you with a pleasant surprise of diced onion and jalapeños inside, making for a wonderful extra little kick. Even more pleasant are the dipping sauces; the ketchup is just that, ketchup. However, whereas most venues also serve them with Ranch dressing, Baby Kay’s provides this horseradish cream sauce that is absolutely wonderful! It adds another layer of spice, countered by a cool, refreshing cream when paired alongside the hot hush puppies. Absolutely on point, and they won’t disappoint you!

Now for the interesting option: Boudin Balls. Boudin balls are uncased, fried Cajun sausages. They were served with an apricot-habanero jelly. These are very unique, but definitely well worth ordering! The Cajun sausage is soft, contrasting against the crispy fried exterior and have a wonderful flavor by themselves. But if you want to spice it up a bit, a little bit of the apricot-habanero jelly in each bite and you have this fabulous spicy-sweet burst of flavor with each bite.

As we waited for our entrees to arrive, the patio had filled up, and the restaurant was packed; on a Wednesday night no less! My husband ordered the Duck and Andouille Sausage Gumbo.

If you know gumbo, then you know this is the real deal. There is no cheating with tomato based sauce; it is authentic with the holy trinity (celery, bell peppers, and onion) and a good rue base. The duck was tender and the Andouille sausage was delicious. The entire dish was a compliment to authentic Cajun cuisine like that of New Orleans.

I ordered the Chicken and Andouille sausage jambalaya. I didn’t realize that Wednesday nights through May feature their crawfish boil. A few minutes after our waiter had walked away, and after watching bowl after bowl of the Crawfish Boil come out, I quickly sought out our waiter and changed my order! He was very accommodating and changing my mind was no issue at Baby Kay’s!

My husband looked at me like I was nuts when I ordered this; for starters he doesn’t eat “bottom crawlers” as he likes to refer to them, and secondly the bowl was huge. No matter, I told him I could down it without an issue, even though I can’t bring myself to “suck dem heads.” Boy was I wrong! The bowl was deceptively large and overflowing with crawfish; one third of the way into it and you couldn’t even tell I had made a dent! This was a dish to be shared with two or three other people. I’m not sure exactly how much was there, but I suspect it was approximately four pounds of crawfish, and the entire bowl was $36. The crawfish was fresh, and after being boiled were tossed with Cajun seasonings. The boiled potato and corn on the cob were a pleasant surprise. The water used to boil them was very well seasoned with salt and other spices, and had a slightly floral flavor. No salt, no butter required; they were perfect to eat on their own without being coated in the traditional staples. My only complaint is that it was served in a one size fits all order, and it would have been nice to have the ability to order by the pound to tailor to the number of people partaking.

This was our second visit to Baby Kay’s, and definitely won’t be our last. It might be a bit of a hike across town, but when we’re in the mood for a good, authentic Cajun meal Baby Kay’s will be our destination. Don’t expect to find much on the menu that is shy with the spice.