Sean Bolan’s is an Irish pub in the heart of Bel Air Maryland that offers good food, good drink, and good atmosphere.

I was first introduced to this place by a group of friends living in Bel Air, which is about 15 minutes north of the Baltimore beltway. We would go there and grab a beer or two on the weekends I would come up and just enjoy hanging out. We’ve also sat down for food on previous occasions and I’ve never been disappointed, so I decided to do a review on the place so that I could share it with our readers (hello! Anyone out there?).

I was already in Havre de Grace, which is even farther North from the beltway, visiting friends for the weekend. As new parents they’ve been extremely busy doing new parent things, which left me with some free time. I had ridden the bike up that weekend, so that Saturday morning I hopped onto the bike and headed into town. After running some other errands I ended up at Sean Bolan’s for lunch. The outside is a red brick and wood panel store front with a large set of windows and a small door. It’s pretty easy to spot.

Once inside, you have the downstairs bar on your right; this is the place to go if you want a good selection of beer.

Farther back is the downstairs dining area with a set of steps that leads you to an upstairs bar, more seating, and a balcony.

The Balcony gives you a nice view of downtown Bel Air and a perfect spot to drunkenly heckle passersby. You’re better off doing this at night so it’s harder to be identified and you’re not the only one commenting.

After snapping a few photos, I headed back downstairs and got a table by the bar to order food. I started with a draught and ordered the Seafood Chowder and the Banger Sandwich. Unfortunately I can’t remember the name of the beer I ordered, but I’m pretty sure it was some sort of oak aged stout. It was a very dark beer and I distinctly remember the oak flavoring. I really need to write this stuff down.

Although I can’t remember the name of the beer, I must say that I’ve always been impressed by the beer selection at Sean Bolan’s. My tab has always been significantly higher than my friends because when they’re drinking Yuengling, I’m drinking Unibroue Chambly Noire, Dogfish Head, Delerium Temens, and other delicious beers that they serve. If you’re a beer snob like myself, that’s a major reason to pick Sean Bolan’s over many of the other bars in town.

My Seafood Chowder was served shortly after ordering. It was really good. The chowder broth had a seafood taste to it, but it wasn’t overpowering and fit just perfectly. There were generous chunks of cod, salmon, shrimp, and mussels and it wasn’t all just broth like at some other places. I would go so far as to say it was delicious. I was rather impressed by it.

Not long after finishing the Seafood Chowder, my Banger Sandwich was brought out. This thing was massive. It was a grilled sausage sandwich on rye covered with cheese. The sandwich was cut in half with a large helping of mashed potatoes and gravy filling the middle of the plate.

The sandwich was good. The sausage was tender and not tough to chew, the cheese and bread combination was delicious. My only complaint was that the mustard was overpowering. I like mustard but when it’s the only thing you taste at some points, it’s too much. Other than that I really enjoyed the sandwich.

The mashed potatoes and gravy were excellent as well with the potatoes being nice and smooth and covered with thick flavorful gravy. 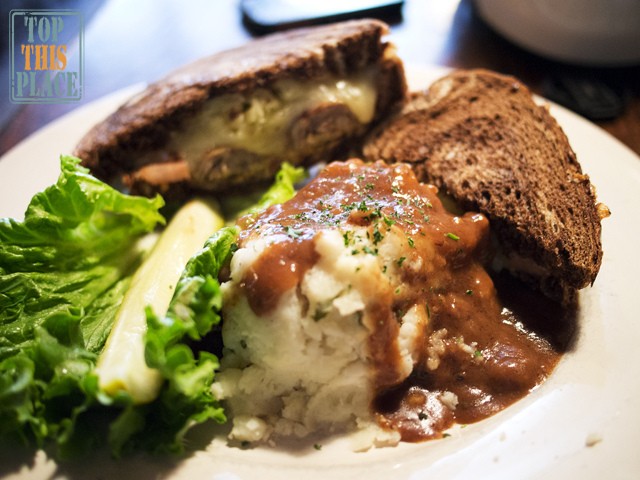 Sean Bolan’s is an excellent little bar in downtown Bel Air with a great selection of beer and a lot of good food to choose from. If you need a place to have dinner with friends and share a few laughs over a pint, make sure you definitely consider Sean Bolan’s as an establishment to give your business to.