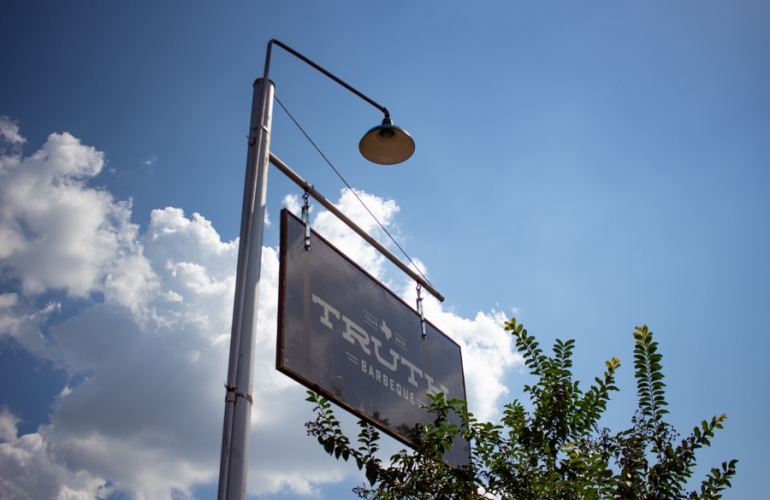 We decided to take a beautiful mini-road trip to Brenham, Texas. Brenham is a city in Washington County. Brenham is also home of Blue Bell Ice-cream and Truth BBQ. Truth BBQ has been on the top ten list of Texas Monthly magazine. When Daniel approached me with trying it out, I was game to go because Brenham is an hour drive without the traffic, so of course you know it had to be mouth-watering delicious if he was willing to take that drive. I was very excited about it mainly because we haven’t been anywhere really since our EPIC road trip to Canada. Daniel had already warned me that there could be a long wait and we’d have to sit outside. Being outside in the Texas heat is not in my top three things, I remotely like to do. If you’re from Texas, you understand. On this day, the humidity was low so I had high hopes that it would be a great day to be out without actually sweating. Outside of Truth BBQ, there is plenty of covered seating. I love the colorful lettering on the side of the main restaurant. It is used a-lot as a back drop for pictures.

The outside of Truth BBQ has a rustic feel to it. The landscape was neat, well-kept with plants, shrubs, and flowers. You can chose to purchase a fountain drink inside, or help yourself to water or to even a free Lone Star beer. Tips are always welcome. With the warmth outside I was craving an ice-cold beer.

The inside was nothing like I thought it would look like. It was very cheerful and cute. There are a couple of tables inside if you’re lucky to get a seat when it’s not packed. I had my eye on the cake displays! I wish I could try a slice of each cake! I quickly announced that I was not leaving without trying a slice of cake.

As we approached the counter, these young guys were behind the counter happy as can be. They were super nice and helped us with our order. Daniel already knew what he was ordering, The Trinity. We waited for the ladies in front of us to order. They saw me with my camera and said I could take a picture of her brisket sandwich. OMG it was hearty looking! The gentleman in the middle added a huge paper on our tray and started cutting our meats. It literally covered the entire tray. As we were talking to them, we told them our growing boy was craving meat and he was outside with our dog. Before we paid, he wrapped up a huge bone for our little dog, Geppetto to enjoy outside. I thought oh, boy he will love it!! I just thought that was very sweet and so thoughtful.

Daniel carried the tray to the table Diego picked out for us to sit at. I was eager to try the meat. Our dog was sniffing the air like crazy. I quickly unwrapped the bone and gave it to him. He really enjoyed his bone. I couldn’t get over how much meat was on the tray!! I really didn’t think we could finish it all, or so I thought.

As we began eating, I really was in awe of how delightful the brisket was. It was so soft you barely had to chew. In fact, you could easily swallow it in one gulp. Daniel grabbed the sauce to add to his meat, he offered me some, but I didn’t want anything on my meat. However, I did try it just to see what the taste was like, and yes it was savory for sure, but opted not to have any. It was perfect the way it was.

After we finished as much as we could, I didn’t stop thinking about the cake! I was full to capacity, but I couldn’t leave without trying it. I’ll always wonder and so with that, I went inside and ordered a slice of banana caramel cake. As if Truth BBQ wasn’t awesome already, they added a star sugar cookie on top!! The slice of cake was HUGE! It was so massive that Daniel had to take a picture next to his hand to show how large it is. We had to eat it very slow and it took us a while to finish it. Let me tell you it was worth it!!! Truth BBQ is the real deal!!

View all posts by Diana